We caught up with Matt Brenssell, from St John Alexandra. He shared what it’s like to attend crashes and work in a rural, tight-knit community, where everyone knows everybody else.

“I have been to a number of crashes in the last few months. I find that after so many years of seeing the results I have started to wipe them out of my mind. It’s a self-protection mechanism. To me that’s what’s scary – you become so used to it that it stops having any affect.

Now it’s different things that hit me. It might be that members of the public were there before us. I wonder about the impact it has had on them. Some step up and help but others have no idea what to do. They just stand there.

Or I think about what might have been different. What if we hadn’t arrived in time? What if they hadn’t taken that quick look at the stereo? They would probably be fine and we wouldn’t have to be there.

Then I don’t think about it again until I’m back in the driver’s seat going to another job. We don’t know what we’re going to see and all the past crashes come flooding back. I’ll think about kids were close to being parentless, or are parentless. The people whose lives are changed forever.”

Being a paramedic in Central Otago

“Central Otago is a long way from hospital. Our resources are stretched here. Volunteers make up our fire brigades and a high percentage of St John. If there’s a car crash and someone needs help we could easily be out at another event more than an hour away.

If there are multiple casualties and they’re in isolated locations it can involve a lot of people having to travel long distances. We can stabilise but if it’s serious enough they might need to go to Dunedin or Invercargill. That takes time that some people don’t have.

I wish people would think about that while driving here. I see some shocking things on our roads. Some people won’t even pull over for an ambulance. We’ll have our lights on and sirens going and nothing.

In a community like this you don’t have to go far to find a connection with people. Sometimes you hear about a crash on the news and think “oh that’s such and such’s mother or cousin, how terrible”.  Actually, the whole of New Zealand is a small place. We’re all connected. These crashes affect all of us.” 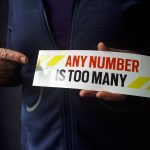